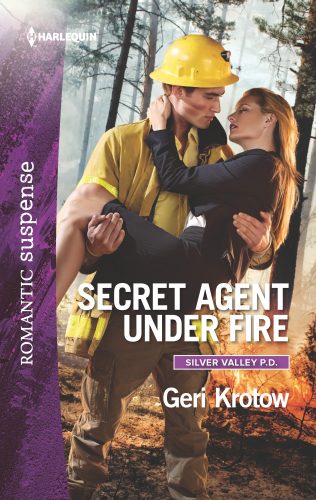 Silver Valley Fire Department Chief Keith Paruso is haunted by the fallout to his reputation from false negligence charges and now a string of arsons that threaten the heart of the town that’s become victim to a cult’s machinations. When former FBI arson expert Abi Redland joins forces with the secret Trail Hiker agency to catch the fire starter and bring down the cult, Keith finds himself working side-by-side with the a woman he could spend the rest of his life with. But only if he can accept he’s worthy of Abi’s love. And Abi must forgive herself for a lethal mistake she’s made in her past.

Abi and Keith prove unbeatable as a law enforcement duo, but for it to become more they have to survive the cult’s deadly plans for Silver Valley. 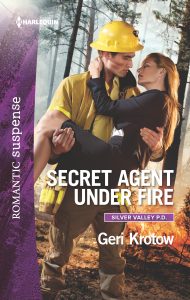 Abi wasn’t sure how long they sat on Hawk’s Rock but judging from how sore her butt was when she stood, it had been close to an hour.

“I’m sorry, Keith. I don’t want to ruin our day with such a downer story, but you deserve to know who you’re working with. And I owed you this much, after putting you in an awkward place at the warehouse.”

“I didn’t have a problem with it, Abi. You’re the one who’s wrapped around the axle about it.” He hopped to his feet with surprising agility for a man with a back injury.

“How can you do that after straining your back less than a week ago?”

“Practice. And lots and lots of core work. If I didn’t work out, I could never do my job.”

“It’s the same for me. Or was. And will be, with this new business.” They were several feet from the ledge, the wind cool and pine scent heavy on the air. As the sun rose to midday, the area was out of shadow. Except for the brim of Keith’s hat, which gave his eyes enough protection that they were fully open as he looked at her.

“You have the bluest eyes I’ve ever seen.” Her voice was a whisper. She reached up and placed her hand on his chest as if under a trance. But it wasn’t Keith’s spell, or her desires, that compelled her movement. It was what they shared—the charged connection that wouldn’t let up.

He grasped her hand and lifted it to his mouth, placing an openmouthed, moist kiss on her palm. She groaned, squeezing her thighs together against the heat that pooled between her legs. “Oh, boy.”

She grasped the bottom of his shirt with her free hand and tugged him to her, farther from the edge to a small copse of trees hidden from the trail. “Again. And this time, don’t stop.”

Keith took over from there, holding her hand and leading her to a more secluded area that appeared to be part of the rock outcropping but the flip side. Not a cave, per se, but a sheltered area with pine needles as cushion and tree trunks, bushes and ferns as protection from unwanted eyes. Not all of the summer foliage was in full bloom yet but there was enough to feel safe. Keith’s arms did the rest.

“Come here, Abi.” He sat on the ground with his back against the stone, his legs stretched in front of him.

She hesitated. “Are you sure your back can handle this?”

He didn’t answer until she was seated on his thighs, which forced her to wrap her arms around his thick neck for balance.. “My back will be fine, Abi. I’m not going to make love to you for the first time, not here. But we’re going to have some fun with a little old-fashioned necking.”

“‘Necking’? I haven’t heard that since my grandmother told me she and Grandpa used to neck in the back of his Oldsmobile when they took drives in the country.”

Their mouths met with equal hunger and insistence. Keith’s kiss was expert; his hands had to have a certification for the way he stroked her. And his lips were the pure definition of firmness meeting sensuality. When their tongues touched, Abi squirmed with want. If there wasn’t a rock wall behind Keith, she would have pushed him backward; to hell with not making love out here for their first time. 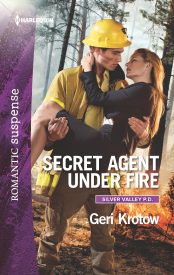