Book 2 in the Shop 'Round the World Series 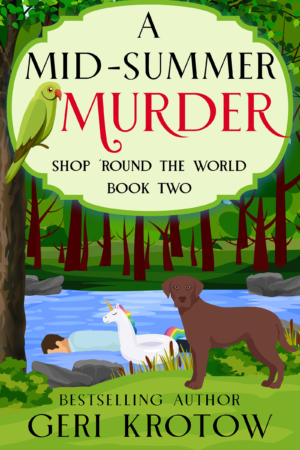 This small Pennsylvania town once again becomes a hotbed of secrets.

Only Angel Warren, a retired Navy Pilot and owner of Shop ‘Round the World, can turn a summer day at the river into a murder investigation. But when her brother Bryce’s unicorn float snags on a corpse’s hand, suddenly Angel and Bryce are suspects. It doesn’t help that Angel knows the victim and was one of the last people to see Hank Price alive, or that Angel witnessed a disturbing argument between Hank and his wife. Plus, she and Bryce may have heard the shot that killed Hank.

Once more, Angel inserts herself into the middle of the investigation, this time with her best friend Detective Trinity Colson’s tacit approval. Who could have wanted Hank dead? Angel soon discovers Hank had a secret life that included sketchy business dealings and a gambling addiction.

The question isn’t how Angel will juggle her sleuthing alongside managing her gift store during the height of tourist season, family drama, and a burgeoning romance. It’s how will Angel solve the crime without stumbling into the killer’s sights? 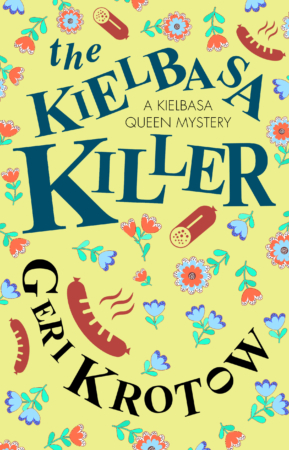 Lydia Wienewski discovers that her family’s ever-popular kielbasa isn’t the only thing that’s been pricked when she finds a body in this entertaining and smartly written cosy.

Lydia Wienewski can’t wait to open her dream Polish-American café and bakery in Cheektowaga. But while her father recovers from a stroke, Lydia must help manage the family business, Wienewski’s Weiners & Meats, over the busy Easter holiday. She’s soon preparing a huge amount of their famous kielbasa – and dealing with her father’s rogue meat supplier, Louie McDaniel.

When Lydia finds Louie dead in the family’s private smoker next to the kielbasa, the family’s antique sausage pricker sticking out of his neck, her problems are about to get much worse, especially as she seems to be the police’s prime suspect! Who would commit such a terrible act? Enlisting the help of her irrepressible grandma Mary, can the sleuthing duo catch the killer and prove the Wienewskis innocence before more grisly deaths occur?