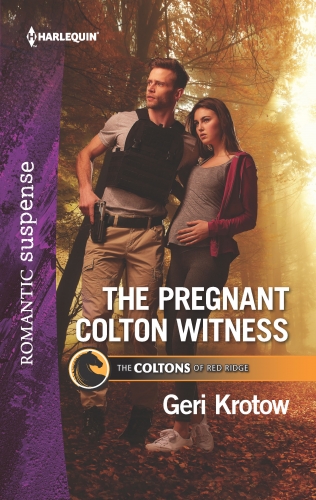 One night of passion with Officer Nash Maddox left Dr. Patience Colton breathless—and pregnant! The two are unexpectedly reunited when Patience becomes a
witness to a murder and K-9 cop Nash rushes to her rescue, along with his canine companion. The two will stop at nothing to protect their growing family, but a
killer has other ideas…

is Part of the Coltons Series 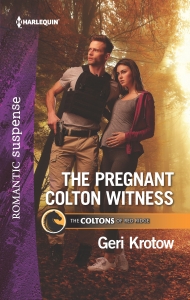 “RRPD is on site, Patience.” Frank’s relief was evident. “Nash and Greta chased off the suspect, turned over security to the other RRPD units and are headed to your office now.”

“Thanks, Frank.” She let out a shaky breath, but still couldn’t let go of her weapon. What if the man had circled around back?

A knock sounded on the damaged door, followed by a deep bark—Greta’s.

“Patience, are you there? It’s Nash.” Greta’s second bark let her know the huge Newfoundland wanted to declare she was there, too.

Slowly, Patience unfolded from behind the desk. “Nash is at the door, Frank.”

“Affirmative. You can let him in, Patience. Repeat—he’s chased off the intruder and our units are on site.”

“Patience?” Nash’s voice reflected concern, even muffled by the door.

“I’m here.” She unlocked the door and opened it, and was immediately engulfed by Nash in a bear hug. His arms pressed her to him, his solid, hard body the most comfortable thing she’d ever felt. Patience melted against him and let herself receive his warmth.

“Thank God you’re okay.” He placed his free hand, the one not holding his Glock, on her shoulder, and his eyes blazed with intent as he looked at her. “Are you? Okay?”

“I am. It was…” In a totally uncharacteristic move, tears fell from her burning eyes and she fought to speak. “I’m sorry. This isn’t like me.”

“It’s just the shock. I’ve had to fight tears on ops before, too.” He wiped one cheek with his thumb, then the other. She relished the rough, callused slide of his skin against hers. It grounded her, allowed her to stop gulping for air.

“And some adrenaline.” He dropped his arm and looked her over. “Did you hit anything while you were diving under the desk?”

“No, really, I’m fine.” She rubbed both eyes with the heel of her hand, and realized that she, too, still gripped her weapon. “Except I didn’t know I was still holding this.” She engaged the safety and placed it on her desk. “I think I used everything I ever learned in our practice drills over the last twenty minutes.”

“You probably did. And you handled it perfectly, from what I can see.” As she looked into his eyes she saw his conviction, and it chased away the dark cloud of anxiety that the killer had left in his wake.

“Where is he now?” Quakes of relief started to move through her. She’d done it. Nash had helped. The killer was gone.

“Hopefully, in custody. He took off toward the mountains. The RRPD will get him.” Nash sounded certain, but she wasn’t so sure.

“A man who’s so cold-blooded as to…to dump a body in the lake like that?” She shook her head. “He’s not going to get caught. Not this easily. I’ll bet he has a getaway car stashed nearby.”

Nash put his hand on her shoulder again. “That’s not your problem anymore. You’re safe, the clinic is secure. Get some water, or coffee.” He nodded at the teakettle behind her desk.

“Okay.” Her stomach heaved at the thought of ingesting anything, but tea might be good. Her stomach—had Nash noticed her midsection was thicker?

“Stay put until the other officers show up. They’re here now, I think. Greta and I have to run to the lake.”

His attention was focused on the case at hand, not her burgeoning baby bump. She had to tell him. But not now, in the middle of a crisis.

She tried to offer him a wobbly smile. “The man came up in his boat—it’s on the shore at the bottom of the clinic property. You could take that out to where I saw him dump the body.” Shivers raced up and down her spine. “Nash, be careful. He’s—he’s going to kill you if he can.”

“He’s not going to hurt anyone else, Patience. You’re safe now.” He repeated that, as if he understood just how shook up the entire circumstance made her. “I’ll be back for you.” He paused, and for a moment that hung between them like eternity she thought he was going to kiss her. His eyes glittered with promise, one not solely related to the dark happenings of tonight. Dare she read anything into his heated stare? But instead of placing his lips on hers, he offered a wink instead. “Be right back.”

Nash and Greta disappeared into the corridor, and as she watched through the broken windows, they raced out the door and across the training area toward the lake, their movements in perfect unison. Her instincts told her to go into the kennel and calm her patients, but Nash was right—she needed to wait until she knew the entire property was safe again, that the killer hadn’t come back.

“Dr. Colton!” Officer Maria Ruiz caught her attention, waving from the other end of the corridor. Relief swamped Patience. If Maria was here, then what Nash said was true; the building was secure. For now. She’d feel better when he was behind bars, when the mental image of him sneaking back to kill her didn’t seem an inevitable outcome to her hyped up brain.

“Maria. Thanks for clearing the place.”

“It’s my job.” Maria looked at her, then peered out a window toward the lake. The K9 team was in the boat after the evidence team quickly dusted it for prints and searched for evidence. The launch made its way toward where Patience had seen the woman’s body being dropped. “That Officer Maddox and Greta in the launch?”

“Yes. They’re headed for the center of the lake, by the dive platform.” Patience had a hard time reconciling the spot with where they trained the diving k9s and sometimes sunbathed during the summer. “It’s where the suspect was when I saw him with the woman.”

Maria nodded. “Yeah—the other K9 unit is already there. See the other launch? They just said Greta’s going to be diving.” She looked around Patience’s office, checking every cranny and under the desk before she was satisfied. “You should be safe in here for now. How did the man get into the clinic to begin with?”

“I heard a gunshot, when he was still outside. I think he must have broken through the security gate, and then smashed a window to unlock the back door.”

As she replied Patience realized how slim the chances were that the thug was able to not only expertly break through the eight-foot security fence, but also enter the clinic so quickly. “He had to be trained to do this. Or knew the codes.” But then that would mean someone they trusted was a criminal. Or maybe one of her staff had unwittingly given information to the wrong person.

Maria watched her with a gravity reserved for their toughest cases, reflecting Patience’s concerns. “That he knew the codes seems unlikely—we’ll check to see if he actually shot the outer gate, and determine exactly how he got in. At the very least he has a good understanding of the clinic’s layout, judging by how quickly this escalated. The fact that he came right to your door…” She assessed Patience with a compassionate gaze. “Do you want to come out back with me?”

“Sure.” There was nothing she’d like more than to see the assailant caught, or better, the women he’d dumped into the lake still alive and okay. And staying in her office alone right now wasn’t high on her list of fun things. Patience needed to be with people, and Maria’s grounding presence fit the bill.

They walked past the kennel and Patience noted that most of the patients were amazingly calm, even with the wide-paned windows shattered. “We’ll be back, everyone.”

“Do you think they understand they’re okay now?” Maria spoke as they reached the back door, which had clearly been broken through, its window also smashed.

“Absolutely. Gabby, the parrot, is being quiet—that’s telling. When she gets riled up, she can incite a puppy and kitty riot in there, let me tell you.”

Maria laughed. “At least your sense of humor hasn’t left the building. That’s a good sign.”

“Probably.” She wasn’t feeling particularly jovial, but more like punch-drunk. The adrenaline come-down affected everyone differently. The baby’s welfare gnawed at her. Adrenaline flooding her system was bad enough; it couldn’t be great for the baby. She had to make an appointment with her doctor soon, and get a referral to an ob-gyn if necessary.

Thoughts of the baby’s needs took a backseat as they approached the open gate. Patience saw bullet holes in the area surrounding the keypad.

“I’ve got to take photos and gather evidence.” Maria pulled out a plastic evidence bag.

“Of course. I’m going to see if I can watch the dive ops from the deck.” Patience jerked her thumb over her shoulder, indicating the clinic’s small pier. There were a half-dozen launches used for K9 and police diving exercises and ops. Three were out in the center of the lake. “Thank you, Maria. I wouldn’t have left my office if you hadn’t shown up.”

Once she was on the deck, looking across the icy water, it hit Patience how close the killer had come to reaching her. The fact she’d made it back to the clinic and managed to lock the door was incredible, seeing how easily he’d broken through the fence. It had felt as if she’d run miles with the recuperating Labradoodle in her arms, but it had been less than a hundred yards. Too close.

Her heartbeat raced and she closed her eyes. The baby needed her to be calm. Patience reminded herself what Nash had emphasized: she was safe. But the woman the man had dumped in the water—probably not. Patience quickly refocused on the dive operation.

With the binoculars still around her neck, she used them to watch the divers from the shore, ignoring the cold as she shivered in her jacket. It was clear that Greta wasn’t having the luck she was expected to, as Nash and the other K9 officers repeatedly encouraged her to go back under, to find what they knew was there. The woman with the long, pale hair. Finally, Greta’s large head surfaced and Nash’s arm signaled for the other officers to help. Patience made out something in Greta’s mouth as several shouts from the assembled RRPD officers echoed across the water.

The rescuers got the body onboard a slightly larger RRPD vessel normally used in the warmer months when boaters and swimmers got into trouble. EMTs who’d joined the op worked over the woman, valiantly attempting to ascertain if she’d survived, or had a chance of life once at the hospital and warmed back up. But the pit in Patience’s stomach confirmed what she already knew—there was no way the victim had survived her chilling plunge. 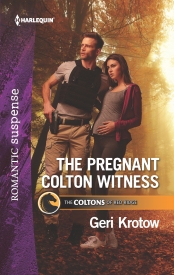