Part of the Stand Alone Books 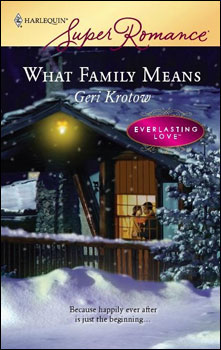 To Debra Bradley, marriage is being with the man you’ve always loved—despite the odds. Despite what other people think. And marriage is about family, about protecting your children from a sometimes hostile world.

To her husband, Will Bradley, family is about creating a safe haven. Where it doesn’t matter that one of you is white, the other black. Where it’s never mattered…

All these years later Will and Debra are still in love, still each other’s best friend. They’ve made a good life for themselves and their children. But their daughter, Angie—pregnant and estranged from the husband she loves—has to discover for herself what family means….

Find out more about the Stand Alone Books → 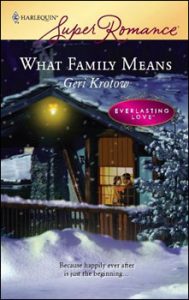 “You’ve never believed me about this the whole time we’ve been married. Why should I expect you to change now?”

Will Bradley, my husband of thirty-five years, stared at me with an intensity that made my hands clench on the shirt I was putting in his suitcase. His charcoal eyes sparked with annoyance. Will was never one to get easily worked up, but judging by the twitch over his left eyebrow, my latest obsession with our grown children’s lives had sent him over the edge.

Or at least very close to it.

“I hear you, Will, you know I do. But the kids, especially Angie, haven’t had the smoothest path.”

I tried to keep the “look” off my face, the expression Will and our children said I’d mastered. The “I’m right so don’t even bother to argue” look.

Apparently I didn’t succeed in keeping my face blank. Will’s nostrils flared as he drew a deep breath.

“Dammit, Debra, you go back to this every time.” Will referred to my long-held belief, and, okay, guilt, that our interracial marriage had placed undue burden on our children.

He glanced up from packing.

“What do you always say to me, Deb? ‘It’s the twenty-first century. The new generation doesn’t see us in terms of skin color. We don’t get a fraction of the stares we used to draw.'”

“Give me some credit, Will. I know that times have changed, and the kids are all doing great, better than a lot of our friends’ children.”

I stood up from the bed to make my point.

“Angie’s always had it the toughest. She’s older than the twins and remembers the more-blatant prejudice in high school and college. Jesse’s family wasn’t immediately supportive of their white son marrying our biracial daughter.”

Will didn’t respond as he packed his socks and underwear. I hated when he went all quiet like this.

“Why did Angie move back to Buffalo while Jesse’s away? Why didn’t she wait for him to return from his mission?”

I knew I wasn’t the only one worried about Jesse’s safety in Iraq, where he’d gone for humanitarian reasons. He was there to use his surgical skills, working as a government contractor. The military was grateful for civilian talent such as Jesse’s.

Will ran a hand over his short-cropped hair. His fingers caught my eyes. I was always a sucker for his hands, chocolate-brown skin stretched over the most elegant fingers, the most sensual hands, I’ve ever seen. He could have been a doctor like his father if he’d wanted to. But his passion was architecture. He’d used those fingers to produce beautiful buildings instead.

“This is what I’ve never understood, Will. How can you be angry with me for caring about our children?”

“There’s a big difference between caring and care-taking, Debra.”

“Don’t Iknow it.” As soon as the words slipped out, I realized they would’ve been better kept unspoken.

Will’s hands rested on his still-slim hips, his stance combative.

“Is that what this is about? Do you need a break? I know it’s been a long year for you, Deb.” Will referred to my looking after his elderly mother, Violet. She’d become more dependent on us the past nine months.

He didn’t give me a chance to answer.

“I’d be home more if I could,” he went on, “but I need to take care of these last projects, then I’ll go down to just a few a year, let Blair and my associates run things.” Will zipped up his suitcase as I watched from my perch on our bed.

It was a ritual we’d shared since the early days of our marriage. I brought in the piles of clean laundry, he chose what he needed for his business trips, and we talked while he packed.

“Honey,” I said now, “I don’t want to argue. I just want to be here for Angie. And I’d love to have your support.”

“I know, baby, she’s your only daughter.” Will smiled at me despite his anger at my too-familiar behavior.

Will walked around to my side of the bed.

“The twins were much more difficult when they were younger,” I said. “Now that they’re grown, it’s as though they don’t need their mama so much. They’re men. But Angie, a daughter always needs her mother.” I couldn’t help the tear that slid out from under my closed lid as Will pulled me into his embrace.

“Honey, I’m just asking you to focus more on yourself, on us. You’ve given Angie and the boys the childhood, the family, you never had and we’re richer for it.”
I soaked up his love, but the question that wouldn’t die nagged at my conscience.
Had it really been enough?

Sometime after three, the school bus churned to a stop in front of the clapboard house. Debra knew the house; it signaled the end of her half day of kindergarten. She was in Miss May’s afternoon class at Lakeview Elementary. Debra liked riding to school on the noon bus because there were only five-year-olds with her. But in the afternoons the older kids came on, all the way up to fourth grade. She thought some of the boys were scary and did her best to sit with her friends.

She got off the bus with four other children. Linda and Lori, twins with matching everything from their blond braids to their saddle shoes, walked to the right and headed toward their duplex.

“Come on.” Will tugged at Debra’s jacket sleeve.

Debra stared at the older boy who ordered her around.

Will. Her mother told her this morning just to go home with him. Debra didn’t like it that she couldn’t go to her own house and be there with Mommy. But Daddy had been gone a long time, and Mommy said they needed grocery money.

So Mommy, who quit nursing school when she met Daddy and had Debra, got herself a job at the doctor’s down the street.

Mommy said the doctor hired her because she needed a job and he didn’t care what color her skin was. Besides, Mommy said she was the best receptionist around and Dr. Bradley knew it.
Dr. Bradley was Will’s daddy.

Will was several steps ahead of her before he turned around.

He seemed so big. He was in the second grade and had homework every night. She brought home her crayon drawings but she’d seen Will’s big-boy artwork. He’d even made a round blue ball one day, painted like a globe.

Debra heard him tell another boy it was “papier-mâché.” She didn’t know what papier-m‚chÈ was but couldn’t wait to get old enough to do her own papier-mâché.

Will sure must be smart.

“Coming.” She forced her sneakered feet to walk faster. She’d never played with Will, even though they rode the same bus and his house was just one block from hers.

Will was Colored, and Mommy said Debra needed to play with girls her “own age.” But Debra figured that her “own age” also meant her “own color.” None of their family had the same skin color as Will.

Will looked like Gladys in third grade, who rode their bus, too. But they were the only two dark-skinned kids Debra knew who attended Lakeview Elementary.

She found it strange that Mommy hadn’t let her play with Will before but now it was okay to go to his house. She didn’t ask Mommy about it, though. Mommy was busy with work.

They got to the top of the steps at Will’s house. Will looked at her with the nicest brown eyes she’d ever seen.

“Here you go. Your mama’s inside.”

“But where are you going?” He wasn’t leaving her alone here, was he?

Tears welled up in her eyes and she scrubbed at them with the back of her hand. Her hand had freckles, but Will’s was smooth and a rich dark brown that reminded her of the chocolate frosting on her favorite doughnut. The kind with the pink sprinkles.

“But this is your home, Will. My mommy said to go home with you.”

“This is my father’s office. Our house is round back.” He jerked his thumb over his shoulder.

Her bottom lip shook and she tried to be brave and keep her chin still.

Will sighed. A big-boy sigh.

“I’ll take you in.” His voice sounded mad, but he put his arm around her shoulders and guided her through the front door, which he opened with his other arm.

Debra decided Will wasn’t so bad, after all. They stepped together into the front parlor. Debra saw lots of folks, mostly Colored like Will, sitting in chairs and on sofas around the room.

“There you are, pumpkin! Come on back. Thanks, William.” Mommy was sitting behind a counter and still had her suit on.

William left then, and the warmth of his arm around her was gone.
“Hi, Mommy.” She stood at the back of the counter with her mom.
Mommy leaned down and kissed her cheek.

“Listen, sweetheart, Mommy has to work for a couple more hours. There’s a little chair and table for you, see?” She pointed at the corner, where it was set up, kind of like in Debra’s classroom.
“Okay, Mommy.” Debra unzipped her jacket and hung it on the back of the chair like she saw grown-ups do. She could work just like Mommy but on her drawings. If she stayed quiet, she knew Mommy could work longer and earn more money for groceries. Last time they went to the grocery store, Mommy didn’t have enough money for cereal. “Bread goes further, Debra,” she’d said. “We can have toast in the morning and sandwiches for supper.”

But Debra hadn’t been able to take her eyes off the bright cereal boxes, with pictures of the prizes inside. Maybe this time Mommy would have enough for the cereal with the rabbit on the box.

Will pulled the vibrating cell phone out of his pocket. He cast a quick glance at his watch. He had plenty of time before his flight left Buffalo International for L.A.

“Hi, Angie. What’s going on with my favorite daughter?”

“Hey, Daddy.” He visualized Angie rolling her eyes as she grinned wryly, the way she always did when he referred to her as his “favorite daughter.” She was his only daughter, and he never got tired of yanking her chain, even if she was thirty-five and he was fifty-nine.

“No.” He shoved his papers into his briefcase. “I’m getting ready to leave on a trip. Your mom beat me out the door today…” 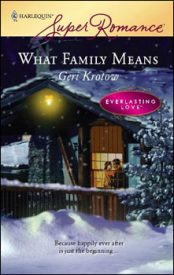