Book 2 in the Bayou Bachelors Series 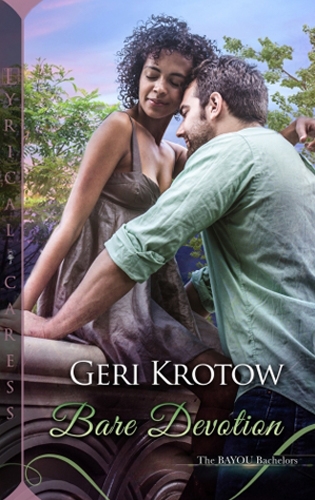 Sweet and sultry, hot and wild…that’s desire, Louisiana-style. And there’s no one better to explore it with than one of the Bayou Bachelors…

Returning to her flooded New Orleans home to face Henry Boudreaux, the man she jilted at the altar, is the hardest thing attorney Sonja Bosco has ever done—even before she discovers she’s pregnant. Sonja backed out of the marriage for Henry’s sake. He wants to be part of his father’s law firm, and his parents will never approve of an interracial marriage. Better to bruise his heart than ruin his life.

Henry can’t forgive Sonja, and doubts that he can trust her again. But learning that they’re going to be parents means there’s no avoiding each other. Springtime on the bayou is already steamy enough…now they’re living in the same small space while their damaged house is repaired. And with each passing day they’re getting a little more honest. A lot more real. And realizing that nothing—not even New Orleans at Mardi Gras—glows brighter than the desire they’re trying to deny…

Find out more about the Bayou Bachelors Series → 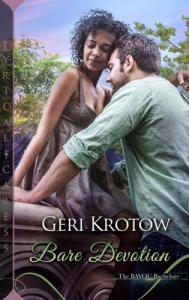 Sonja bit into the almond croissant with the hunger that had plagued her everyday of the past few weeks. Like clockwork, her appetite returned late morning after the morning nausea passed.

She knew the exact night she’d conceived the baby. Her body had felt ‘different’ after the lovemaking session with Henry that had lasted the better part of a late winter night after they’d won a particularly challenging case. At first she hadn’t been able to pinpoint it and blamed her exhaustion on prenuptial jitters. The week before the wedding her breasts swelled, her nipples became sensitive to the shower spray, and she’d felt as though her period was about to start at any moment. But of course it hadn’t. She’d known two days before the wedding for sure. Thank God she’d only shared it with Poppy. If Henry had known she didn’t think she’d have been able to walk away from marrying him as she had.

The memory of leaving her soulmate at the altar made the pastry feel heavy in her stomach and she paused, closing her eyes and breathing in and out slowly to ward off a wave of nausea. Anytime she remembered their wedding day she felt sick all over again.
“Is it that good?” Her eyes flew open at the sexy baritone that only a few weeks ago had coaxed an orgasm out of her as he spoke dirty words into her ear while he moved over her, inside her, again and again.

“It’s delicious.” She put the croissant down on a napkin, next to her stack of files. Henry’s gaze dared her to look away and she never backed down from anyone, so she stared back. A quick flash of disgust shadowed his face before Henry looked away and sat in the seat opposite her, reaching over for his files. Usually they sat together, ready to work until whenever it took to get the day’s items checked off. It wasn’t going to get easy, ever, to know he thought so little of her. Knowing she deserved it for something he didn’t even know about yet—the baby—made it worse.

“I imagine you need time to go over these.” A deft verbal pitch to see how she’d react. Would she go high, admit she should have been back in the office last week, or go low and blame him for her staying away, or ignore it? “Alesia sent me the files last week. I’ve read through them all.”

He had to be playing her—Alesia told Henry everything. He’d know she’d had copies to analyze. Their roundtrip tickets to Bali had gone unused, so it wasn’t as if she’d been out of the country and unable to do any work.

“Any concerns?” He kept his face low, focused on the paperwork, but she saw the blood vessel just above his collar, pulsing in rhythm to his heartbeat. Whenever Henry was agitated that was his tell. She used to like to lick it right before he came. Heat erupted between her legs and made her squirm. Apparently her guilt over not telling him about the baby wasn’t the only reaction she couldn’t shake. She clasped her legs together under the heavy mahogany table, grateful Henry didn’t have x-ray vision.

“No, nothing to speak of.” Her voice was low and throaty and she wished she’d tendered her resignation. It would be so much easier, especially now when every damned hormone in her body was setting off emotions she didn’t even know she was capable of. But a deft noncompete clause she’d signed when his father had hired her prevented her from going out on her own just yet.

Brilliant blue eyes watched her with usual alertness. “You sure about that, Sonja? You’re acting like something’s not sitting right with you.”

“It’s just this.” She motioned very slighting between them, using her finger. “Awkward with a capital ‘A,’ am I right? We didn’t talk about it as much as we probably should have this morning.”

Of course dearest Deidre’s appearance had shut down any chance of the conversation they needed to have in private. The curiosity in his eyes turned to frosted crystal.

“Let’s get it out on the table, then.” He splayed both hands on the dark polished surface, and she wondered if he’d forgotten about the time they’d both arrived to work early, too early. They’d ended up here, naked, in under five minutes. Did he see her naked body as she’d knelt on all fours, waiting for him to take her?

“There is nothing here. Whatever we shared was wiped out when you decided to ignore my attempt to explain my actions to you.”

“No, hold up.” He shot down her attempt to interrupt him with a flick of his hand. “You made your choice. And you’ve decided to continue on at this firm. We both need to raise the funds to get the house rehabbed well enough to sell. Fine, I get it. But don’t think for one minute that there is anything other than our working relationship at stake. We’ve always enjoyed that, correct? And I’m willing to work with you, until the day you decide to leave the firm. Because, let’s face it, I’m not going anywhere. This is my family firm. You, you’ll go out on your own or take a better offer elsewhere. That’s okay. Until then I expect the best you have to offer, and for you to kindly refrain from referring to what we shared. It’s over.”

Sonja stared at the man who’d hung the moon for her and only saw the stamp of Boudreaux on his expression. The same look his father had when she’d told him to take the money and referral he’d offered her to quit when she and Henry announced their engagement and shove them up his tight white racist ass. He’d never fire her, not as a black woman in his otherwise very white, very male firm. And regardless of his racist views, Sonja brought in a lot of business for their firm that they’d otherwise never catch. She’d expected Henry’s father to give her a hard time, but not so much Henry. She’d been a fool.

“Our professional relationship never had anything to do with our personal life. Why should it now?”

Henry didn’t respond but instead glared at her. He may as well have thrown a machete at her for how his silent gesture pained her.

The door clicked open and Alesia entered with trays of lunch food, followed by two clients and Rick, the firm’s other NOLA attorney. As she and Henry stood to greet them she eyed her almost-husband. Her ex-fiancé. The man who’d broken her heart.

Henry was tall and professional looking, whether dressed in a classic suit as he was now or in cargo shorts and a t-shirt like yesterday. He’d been born to inherit his father’s firm, a lawyer’s mind part of his gene pool. And until their wedding weekend, she hadn’t seen that he’d also inherited the insatiable need to make everything appear perfect. Hence the pristine wedding they’d almost gone through with.

Henry wasn’t a people pleaser though, especially not to his parents. He’d bucked their sensibilities and desires by choosing to marry her, a black woman from a bayou family. Henry had never seen her as anything other than the woman he’d decided to marry. She believed that. What Henry had refused to see, however, was that his father was never going to leave the firm to Henry as long as Sonja was his wife. The firm was going to be dissolved and all of his father’s money given to charity, eschewing being generous to either of his sons. Henry’s younger sister, a social worker, was in the naval reserves and somewhere overseas, so she wasn’t even on the family radar. She hadn’t gone to law school; neither had Henry’s younger brother Brandon. It wasn’t about the money, which was significant, but about family legacy. Henry was the man to change it, to turn the law firm into a contemporary, relevant part of the community, serving diverse clients and causes. He saw that corporate law didn’t have to mean serving the same good ol’ boys his father had.

But Henry would never have the chance to improve upon his family legacy if she were around. The younger siblings had gotten the hell away from the family dynasty. But not Henry. Henry needed to be part of his father’s legacy in a way the other two didn’t. Because Sonja saw this, saw the need in the man she loved so desperately, she’d had no choice but to back out of their marriage. She’d do anything for Henry’s happiness, and Henry would never be happy without knowing he’d made a difference in what his father had began. He’d never forgive her for leaving him the way she did and that was all right. Sonja didn’t want Henry’s forgiveness. She’d wanted his love, understanding and trust, but her expectations had been too much.
Henry didn’t have it to give.

And as she watched him, the one man she’d ever pinned all her hopes on, she had to face the cold hard truth. She was as unworthy of trust as Henry. 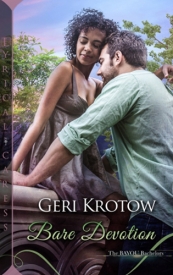